Search
Shopping cart
Do I need a licence to fly a drone UK? The positive reasons why drones are here to stay and the amazingly useful ways they are being used
Back to All Blog Posts

The 10 golden rules to flying a drone safely 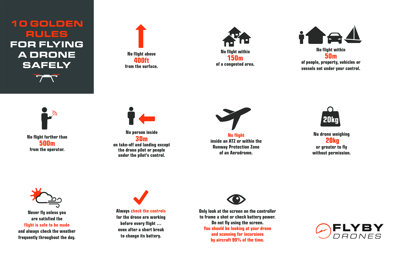 Everyone who flies a drone has a responsibility to make sure safety is top priority at all times.

Should things go wrong, ignorance of the rules will be no excuse and could lead to severe penalties for the drone pilot.

For instance, flying higher than 400ft is banned as it increases the risk of an accident with an aircraft. Endangering the safety of an aircraft is a criminal offence which can lead to a prison sentence of up to five years and/or unlimited fines.

The Government passed legislation in 2019 making it illegal to fly a drone within 1km of an airport or airfield boundary in the UK. This came after drones spotted near the runway caused pre-Christmas chaos at Gatwick Airport in 2018 when around 1,000 flights had to be cancelled leading to long delays for 140,000 stranded passengers.

The top drone training company in the UK is Yorkshire-based Flyby Technology (www.flybydrones.co.uk), recognised experts within the industry as their highly-qualified instructors have more than 600 YEARS flying experience between them.

Most are former Royal Navy or RAF fighter pilots and the chief examiner, Jon Parker, has drawn up a list of 10 golden rules every drone operator MUST follow.

Flyby Technology is based in York but holds drone flying courses nationwide. If you'd like more information on the essentials of owning and operating a drone, visit our Drone Essentials Page >